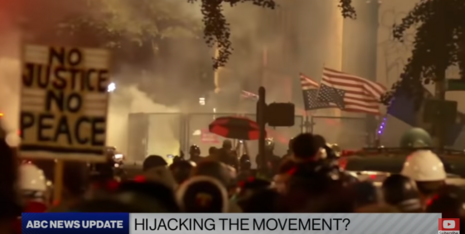 With calls coming in from all across the country to “defund the police” after the death of George Floyd in Minneapolis on May 25, The Washington Post is joining in with the most extreme elements of the far-left mob.

One such allegation is that policing in America is the result of a “historically and structurally racist system” intended to justify attacks such as the ongoing rioting in Portland, Oregon.

In a column carried by the Washington Post, Amrita Chakrabarti Myers, an associate professor of history and gender studies at Indiana University, titled her item “Violence in Portland Exposes the Real Purpose Embedded in Law Enforcement.”

She also blamed the “escalated” tensions in Portland on President Trump’s decision to send in U.S. agents, whom she described as “a highly militarized force with no known training in crowd control,” to “supposedly protect the federal courthouse in that city.”

According to an article on the column written by Brian Flood, a media reporter for the Fox News Channel, the associate professor then claimed:

The death of black people at the hands of the police … isn’t new. For well over a century, black people have been terrorized by those who wear blue.

Flood also noted that the column “then [dove] into the history of police in America,” which Myers said ‘traces its roots back to the institution of the slave patrol’ in 1704.” Myers also claimed: “White people were terrified to see black folks out at night: They believed black people were either conspiring to rebel, committing property crimes or fleeing from bondage.”

“Accordingly,” she wrote, “any black person found out after dark was stopped by the patrol, frisked for weapons and made to show their freedom papers or a signed pass from their owner. If they tried to run, they were hunted down.”

The professor stated that “all 13 original colonies had legalized slavery at some point,” and “[b]y the end of the Civil War, organized police units hit the South, where they were responsible for “many of the jobs the old slave patrols had carried out.”

Her column ended: “While the solution to this problem will be multifaceted, the way forward must be based on understanding that the system of policing in America is historically and structurally racist.”

This kind of vicious conspiracy theory — that an American cop on the beat in 2020 America is acting like some kind of runaway slave patrol — needs not just a fact check, but a gut check.